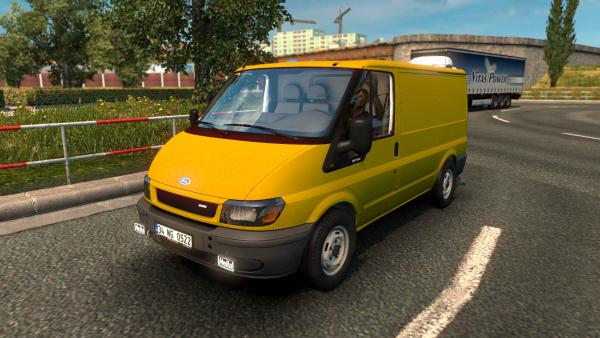 In the summer of 2000, Ford launched the sixth generation of minibuses and vans Ford Transit MK6, the car received a new design and was made in versions with rear and front wheel drive. The production of cars was discontinued in 2006, when they were replaced by the seventh generation Ford Transit.

The Ford Transit MK6 van mod for Euro Truck Simulator 2 has in its arsenal three color options for the original interior with the ability to install accessories in the interior. There are two types of suspension, low and high, on the technical side, a pair of engines with 75 and 100 horsepower and a single six-speed gearbox with characteristic characteristics are available to the player of the ETS 2 simulator. And of course, the authors did not forget about the external tuning, if desired, the car can be converted even into an armored car with a machine gun mounted on the roof.

Dear site user, for cargo transportation by passenger car, do not forget to download and install the mod Passenger trailer for all ETS 2 simulator versions!
Ford van
Previous modNext mod