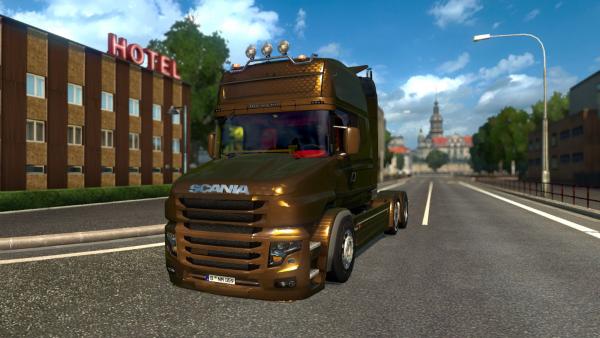 A very interesting mod of the Scania Illegal T tractor, which is a kind of symbiosis of two popular modifications of the ETS 2 simulator: Scania illegal and Scania T. The engine compartment provides a powerful look to the truck, which is not quite usual for this brand of car, and creates a huge amount of original tuning elements directly space image.

Virtual trucker Euro Truck Simulator 2 will be amazed at all the abundance of add-ons that are in the range. Let's start with the engines, they are presented in a wide range, from 360 to 3000 horsepower in the amount of 18 pieces, the collection of gearboxes is no less diverse, of which there are eight, 6.8, and 12 speeds in the set. We will not ignore the many cabs and chassis with 4x2, 6x2, 8x4 and 10x8 wheel formulas, of which there are 8, respectively. Well, about the variety of components for tuning, including detailed, you can talk forever, their incredibly solid number.

When buying a car at a car dealership, the driver can give his truck a unique look, because in addition to installing or replacing accessories, such as side skirts, radiator grilles, fuel tanks, exhaust pipes, etc., it is possible to tint the windows in your favorite color, to install any color in the passenger compartment gamma, arrange various lighting equipment on the cab and tractor chassis. And that's not all, in order to fully learn everything that is included in the Scania Illegal T mod for Euro Truck Simulator 2, you need to download and enjoy the super-tractor Scania.

The Scania illegal V8 truck, known to many for its popular truck manufacturer, Scania, has eighteen engines with 3,000 horsepower. The original chassis with modifications to the interior of the...