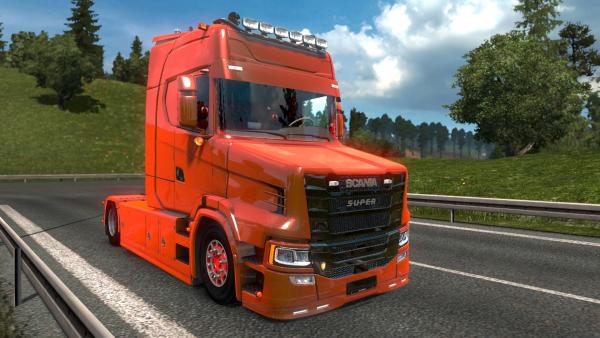 The new Scania T NextGen add-on adds to the virtual world of the ETS 2 simulator, the Scania 2016 truck, in a version with an engine compartment. The styling modification is similar to the RJL Scania T tuning mod, which was based on the classic standard Scania R trucks.

The Scania T NextGen tractor mod for Euro Truck Simulator 2, designed on a chassis with a 4x2 wheel arrangement, is completely independent, that is, it occupies a separate registration in the car dealership. On the technical side, an engine with a capacity of 730 horsepower and five 12 high-speed gearboxes was implemented. From external tuning, it is possible to install additional equipment on the cab roof, change headlights, peaks, tires and some other specialized elements. Of particular note is its own set of sounds and an improved interior, based on the interior of the default Scania 2016.

Dear user of the site, carrying out the transportation of goods on the virtual roads of Europe, for a variety of gameplay, do not forget to download and install new maps for any version of the simulator ETS 2!
tractor unit Scania truck
Previous modNext mod

The standard Scania truck registered in a separate Scania Megamod slot takes on a completely new look, as the tuning kit includes a large number of additional elements. Among them are new fuel tanks,...