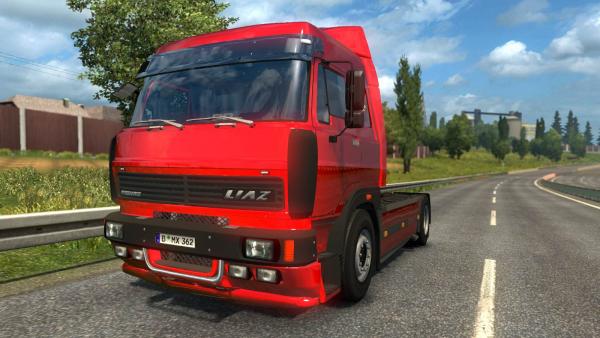 The LIAZ 300 range of trucks, as well as the Tatra T815, hails from the Czech Republic; Their production was established in 1993, and was carried out for 10 years. Unlike his fellow countryman, the truck has a more modern appearance design and relevant technical stuffing.

The LIAZ 300 truck mod for Euro Truck Simulator 2 has a choice of a pair of chassis with 4x2 and 4x4 wheel formulas, which you can choose when buying a car in the Iveco dealership. The authors have implemented nine engines with power from 310 to 1020 horsepower and several gearboxes with six and twelve speeds. The special attention of the virtual truckers of the ETS 2 simulator deserves the original interior with full animation. The developers of the modification pleased the players with a set of their own sound effects, sets of brand wheels and an assortment of characteristic tuning parts.

Dear user of the site, carrying out the transportation of goods on the virtual roads of Europe, for a variety of gameplay, do not forget to download and install new maps for any version of the simulator ETS 2!
LIAZ truck tractor
Previous modNext mod