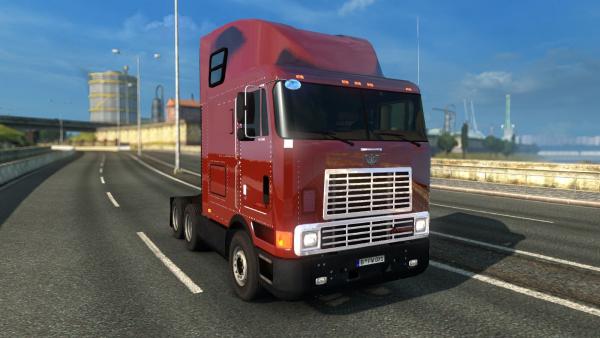 The international American 9800 cabover truck gained unprecedented popularity in the eighties among US carriers, the truck was notable for its simplicity, economy and unpretentiousness, among cars of its class, which caused fierce envy among competitors. The machine was widely exported not only to the countries of the American continent, but also began to conquer the automobile market in Russia and the former republics of the USSR. And in the first half of the nineties, by bribing lawmakers by representatives of competing companies, corrupt lawmakers decided to change environmental safety, after which Navistar International had to curtail production of cars in the United States. But in the end, the administration decided not to completely shut down production, but to transfer the assembly to Russian St. Petersburg. Since then, these magnificent trucks have traveled the roads of our vast country.

The mod of the International 9800 tractor for Euro Truck Simulator 2 is best used with locations containing areas of our state, for example, the Southern region, since the truck can rightfully be considered Russified, but it can also be found worthy of using on the usual ETS 2 simulator. When buying a truck at a car dealership, the trucker will be offered only one cabin color, which can later be repainted in the workshop. The interior of the driver’s compartment and the driver’s rest compartment are precisely executed, the functional characteristic dashboard, with a speedometer digitized in miles, adds originality. The player will like to the smallest detail worked out body geometry, new physics of behavior and a set of special soundtracks.

Dear user of the site, carrying out the transportation of goods on the virtual roads of Europe, for a variety of gameplay, do not forget to download and install new maps for any version of the simulator ETS 2!
International truck tractor
Previous modNext mod

Mods of passenger vehicles are often created by the authors of modifications, however, the Volvo 9800 series of buses is unique, as we have two versions of vehicles that occupy a couple of slots in...

The American truck International 9400i was produced mainly for the domestic market, that is, for the United States and Canada. In a virtual version, the truck has four types of cabs with the ability...