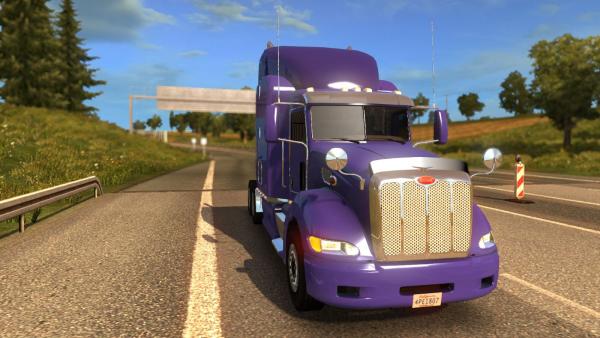 Another classic representative of the American automobile industry is the Peterbilt 386 tractor, which combines the most modern and advanced technologies. Hood location of the power unit and the abundance of chrome parts gives a traditional American truck style. Engineers designed an aerodynamic cabin, which in combination with a powerful engine made it possible to significantly increase the efficiency in operation.

The heavy truck mod Peterbilt 386 for Euro Truck Simulator 2 is constantly being improved by the authors, along with bug fixes made in the first versions, additional useful additions are added. The modification kit currently includes the characteristic interior of the driver’s cabin with a precisely made dashboard, in the trucker's rest compartment there is a bedding set, a TV, a refrigerator, a microwave and several other elements for a comfortable driver’s rest, which allows the player to tirelessly cover huge distances of any ETS 2 simulator locations, including large-scale maps of authoring mods like China and Taiwan. The truck has a set of characteristic sound effects and registration in traffic.

A striking example of the classic American automobile industry, the Peterbilt 351 truck, in the game version is presented in all its glory of a real existing prototype. The player is given a choice...