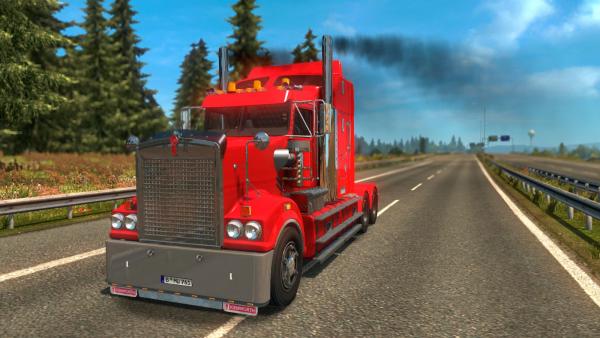 The famous Kenworth T908 tractor, even though originally from North America, was produced at the branch of an automobile concern in Australia. Appearance migrated from true powerful Americans of the second half of the last century, however, the technical filling contains fairly modern units. The engine power of 600 horsepower and its unpretentiousness allows the truck to work in the most severe climatic conditions and carry the heaviest loads as part of a road train, as you can see with a pack of oversized cargo.

The Kenworth T908 heavy truck mod for Euro Truck Simulator 2 is quite interesting, because when buying a truck in a car dealership, you can choose a cab with the right steering wheel support for DLC Cabin Accessories, and this is a rarity among the author's modifications of the simulator. ETS 2 trucker also has four cab options, an original chassis, an assortment of engines with a prescribed classic set of sound effects, fuel tanks, exhaust pipes and other attributes of an external change. And of course, the authors did not forget about the characteristic physics of behavior, which brings truck control closer to reality, and also realized the exhaust outlet from the pipes.