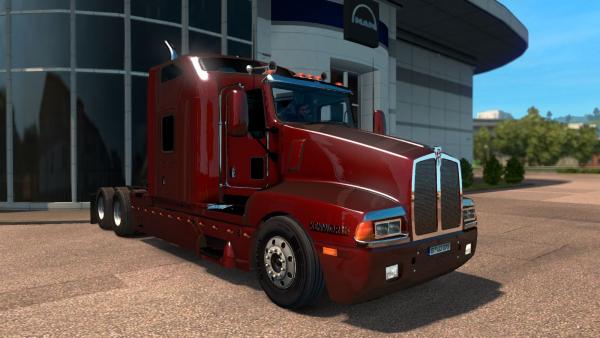 A large-scale addition adds eight US-made trucks with a hood engine layout to the game, and two additional car dealerships for their implementation and subsequent modernization. The new American truck mod for Euro Truck Simulator 2 includes two models of cars from Peterbilt and six produced by the auto giant Kenworth. All prototypes were transferred to ETS 2 from the popular game American Truck Simulator and adapted for the current version of the simulator.

The authors of the modification tried to accurately reproduce American cars for European tracks, as a result, all the hoods have a thoroughly worked out geometry of the body and elements, the original full-weighted interior of the driver's cab and the rest area of the partner, their own set of sounds and characteristic tuning parts. In addition, virtual truckers, if necessary, can change the steering wheel and adjust the steering column to your liking. The massiveness and abundance of chrome, typical for Americans, will allow the player to become the king of not only European roads, but also other established locations: maps of Italy, Northern Scandinavia and the like. To sell new products, the developers added two new car dealerships located in Munich and Warsaw to the game world, which creates the illusion of realism and adds interest to gamers.

Dear user of the site, carrying out the transportation of goods on the virtual roads of Europe, for a variety of gameplay, do not forget to download and install new maps for any version of the simulator ETS 2!
Peterbilt Kenworth truck tractor
Previous modNext mod