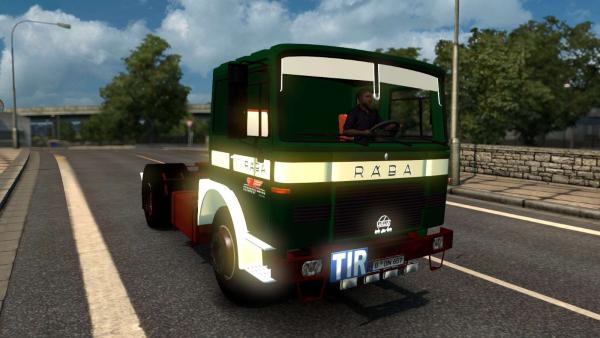 Rare trucks have always been famous among fans of the ETS 2 simulator. In the next addition, we will find several cars in retro style at once. One of them, IFA W50, the production of which was carried out in the GDR in the mid-sixties of the last century, and two others, from Hungarian automobile manufacturers: Raba 832 and Raba S22. Many representatives of the older generation probably remember these mechanical hard workers, since in small batches copies of trucks were also delivered to the Soviet market.

The IFA W50, Raba 832 and Raba S22 truck mod for Euro Truck Simulator 2 will be a great addition to the collection of vintage cars, along with the Fiat FNM 210. Each truck has its own original interior of the driver's cab. The authors for a separate model prescribed a characteristic chassis, for IFA it has a 4x2 wheel arrangement, and for Raba 832 and S22: 4x2, 6x4/2, 6x2/2 and 4x2, 6x4/2, 6x2/2, respectively, in addition to this, the possibility of transporting BDF cargo. Also available are several engines, gearboxes and a significant assortment of genuine tuning items.

Dear user of the site, carrying out the transportation of goods on the virtual roads of Europe, for a variety of gameplay, do not forget to download and install new maps for any version of the simulator ETS 2!
Raba IFA truck
Previous modNext mod

Retro car Packard Eight, model 1948 with an abundance of chrome details and characteristic smooth body lines that convey the mod trend of the middle of the last century. The luxury of the passenger...