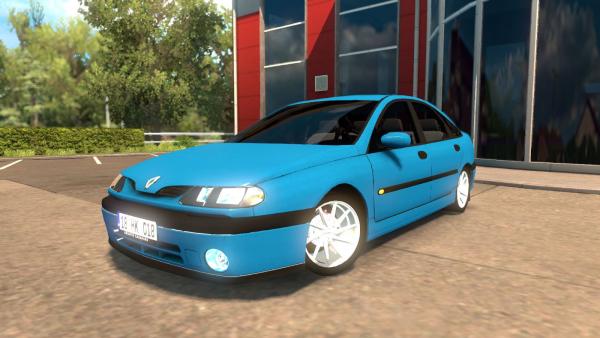 A popular passenger car from the French manufacturer Renault Laguna, produced since the mid 90s of the last century, which replaced Renault 21. It was produced with two types of body, station wagon and hatchback. In total, over 2 million cars were produced during the production. Currently, on the roads of Europe, you can still find preserved copies of this car.

Now we have the opportunity to ride on European roads on this miracle of technology. The mod adding the Renault Laguna car for Euro Truck Simulator 2 will provide us with such an opportunity. The car in the hatchback modification has a well-designed interior, a working animation of the dashboard, in addition there is the possibility of choosing an engine with a volume of 1.6 or 1.9 liters, as well as installing some add-ons in the form of mudguards, bumper trims, a trunk spoiler, a sports exhaust pipe, and in the cabin is the placement of a GPS navigator. After installing the mod for ETS 2, a trip to Europe will be pleasant and comfortable, especially with a car trailer on which you can carry out cargo transportation.