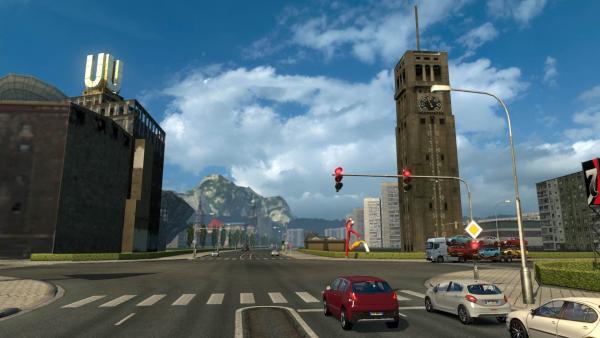 One of the most ambitious mods that was once created for the ETS 2 simulator. The add-on adds a huge location to the game with new states, cities, freeways, towns, buildings and other attributes of new territories. After the installation of the modification, the standard map of Europe from all sides appears to be overgrown with new places, thereby adding additional directions and increasing the length of the road several tens of times.

The Mario map mod for Euro Truck Simulator 2 includes countries and regions such as Finland, Norway, Sweden, Eastern Europe, North Africa, Asia, South and North America, and even a map of Ukraine and Russia from the Eastern Express. In addition, each region has its own weather conditions, day and night duration, temperature conditions, as well as specific buildings, vegetation, expensive infrastructure and much more.

For a player who has become close to making everyday trips on the default roads of Europe, the Mario map mod will be a real gift and will give you many unforgettable game hours.

TruckSim implements a large-scale picturesque mod in Euro Truck Simulator 2 in such European countries as Spain, Croatia, Greece and the countries of North Africa. The supplement combines a...