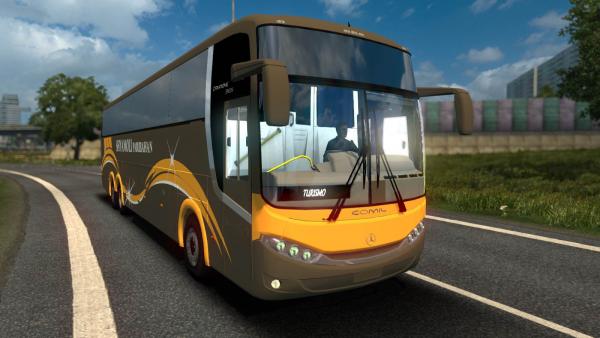 The tourist bus Comil Campione 3.65 from Brazilian manufacturers of passenger vehicles was developed with the direct participation of engineers from the German company Mercedes, which affected the design and gave a lot of similarities with the Mercedes-Benz Tourismo. Production was established in two versions, 12.8 and 14.4 meters long, and the transport was completed with an engine with a capacity of 360 horsepower.

The Comil Campione 3.65 bus mod for Euro Truck Simulator 2 is built on a chassis with a 6x2 / 4 wheel formula, equipped with an original engine and gearbox. The authors recreated the characteristic interior of the cabin with prescribed animation, added a set of their own sounds, as well as five branded skins that you can choose when buying at a car dealership, or when tuning, in any of the garages of the ETS 2 simulator.

Dear user of the site, for passenger transportation by bus, do not forget to download and install Passenger mod for all ETS 2 simulator versions!
bus Comil
Previous modNext mod

The Brazilian bus Comil Campione 3.45 will now start plying the roads of virtual Europe. If desired, the player can choose their favorite engine with gearbox, decorate the exterior of a small set of...