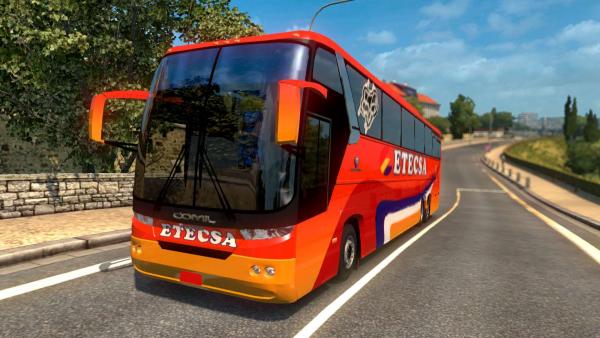 The passenger bus Comil Campione 3.45 was developed in the mid-nineties by the Brazilian company Comil together with the engineers of the Swedish automobile concern Scania AB, and in 1998 its mass production was established. Outwardly, it is practically indistinguishable from Comil Campione 3.65, built on the basis of a chassis with a 6x2 wheel arrangement and is designed to work on suburban and intercity routes.

The bus mod Comil Campione 3.45 for Euro Truck Simulator 2 is made in high quality, when creating it, the authors used the original three-dimensional model with textures. The virtual trucker of the ETS 2 simulator is available with two engines with a capacity of 400 and 480 horsepower and a couple of gearboxes. In addition, the developers of the modification managed to recreate for certain the interior of the passenger compartment and driver’s seat, their own physics of control and behavior was prescribed, animation of the door was added when the engine was started, it was possible to turn on the light in the cab and the effect of smoke from under the cover of the engine compartment was realized. Well, to give personality to the exterior, the addition is equipped with a small set of accessories for tuning and fifteen bright branded skins.

Dear user of the site, for passenger transportation by bus, do not forget to download and install Passenger mod for all ETS 2 simulator versions!
bus Comil
Previous modNext mod

The tourist bus Comil Campione 3.65 is a joint brainchild of Brazilian designers and engineers from Mercedes-Benz, which gave it many similarities with German transport. The virtual version of the...