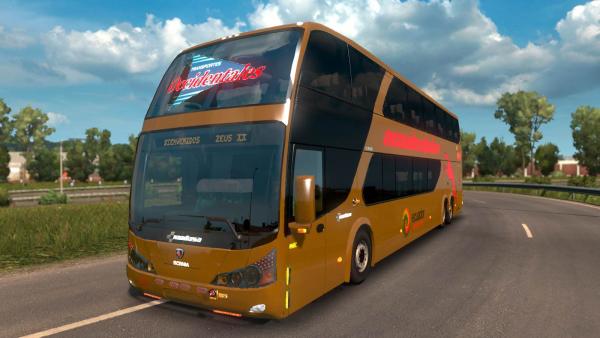 The Zeus 2 double-decker bus, built on a three-axle chassis with a 6x2 wheel arrangement, is manufactured in Peru by Modasa. The passenger vehicle is comfortable and safe, which allows it to serve long-distance, and even international routes.

The Modasa Zeus 2 bus mod for Euro Truck Simulator 2 is made in the highest quality, and will perfectly fit into the virtual world of roads of the author's map of Peru and standard European routes. Of the power units, the authors sold seven engines with power from 320 to 680 horsepower and five gearboxes for six and twelve speeds. The player of the ETS 2 simulator will be pleasantly surprised by the elaborate original interior of the cabin with prescribed animation and the characteristic physics of the behavior of the vehicle and its control. In addition, the developers of the modification added five branded skins, a small set of parts for tuning and a set of their own sound effects.

Dear user of the site, for passenger transportation by bus, do not forget to download and install Passenger mod for all ETS 2 simulator versions!
Modasa bus
Previous modNext mod

The Brazilian Mascarello Roma R8 shuttle bus in ETS 2 has a realistic body rendering of a carefully recreated interior with advanced animation. There are two versions of the chassis with wheel...

The ETS 2 simulator has been replenished with another passenger vehicle. This time, it is a modern Modasa Zeus 4 shuttle bus. The mod of the bus is made in excellent quality, there are two variants...

The Brazilian Mascarello Roma 370 shuttle bus, designed on the basis of the Volvo B420R, has every chance for passenger transport lovers to take their rightful place. The transport was made using the...