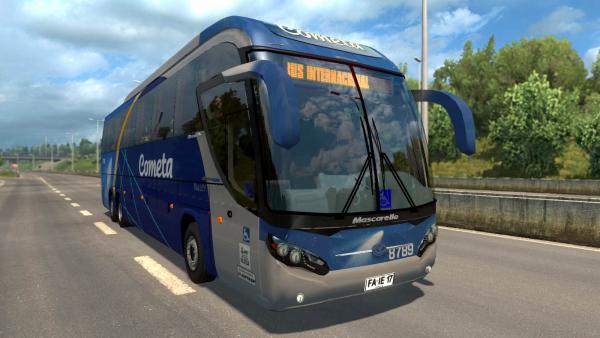 The Mascarello Roma 370 shuttle bus, built on the basis of the Volvo B420R, has been produced since 2011 at the Brazilian automobile company Mascarello Carrocerias e Onibus. The passenger vehicle, unlike Modasa Zeus 3, has a three-axle chassis and a one-story body layout.

The mod of the Mascarello Roma 370 bus for Euro Truck Simulator 2 is made in very high quality using the original three-dimensional model. The player of the ETS 2 simulator is offered two options for the chassis with a 6x2 wheel arrangement, a pair of 320 and 360 horsepower engines and several gearboxes with 6, 8 and 12 stages. The authors have implemented three varieties of branded interior interiors and a set of characteristic soundtrack. To change the appearance of the transport, 18 colorful skins are provided, tinted glass in four variations, curtains, reflective elements and a light information board.

Dear user of the site, for passenger transportation by bus, do not forget to download and install Passenger mod for all ETS 2 simulator versions!
bus Mascarello
Previous modNext mod

The double-decker Zeus 2 bus from the Peruvian company Modasa will noticeably bring diversity to the ETS 2 simulator. The authors have implemented several engines and gearboxes, the original interior...