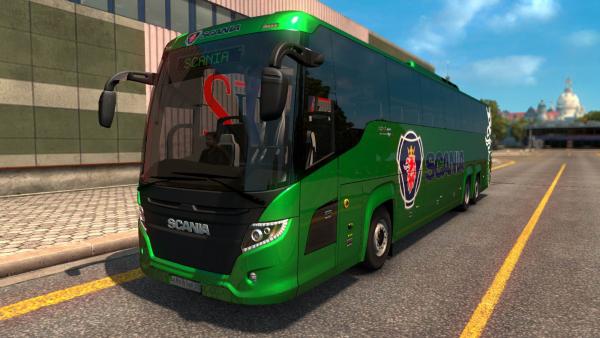 The Scania Touring K410 three-axle passenger bus differs from the Touring K360 in only the number of axles and fewer seats, which are only 44. The vehicle is characterized by increased comfort and is adapted to work on long-distance routes.

The Scania Touring K410 bus mod for Euro Truck Simulator 2 is designed on a chassis with a 6x2 wheel arrangement, the developers of the modification implemented three engines with a capacity of 410 to 440 horsepower and a couple of gearboxes at 12 and 8 speeds, as well as their own behavior physics. The player of the ETS 2 simulator has the opportunity to choose a version with a left or right rudder when buying, which increases convenience when traveling around locations with left-hand traffic, such as the United Kingdom or, for example, an additional map of Central Java. The virtual driver will be able to improve the appearance of Scania with the help of colorful skins and tuning parts, as well as place accessories in the cabin with the support of special slots.