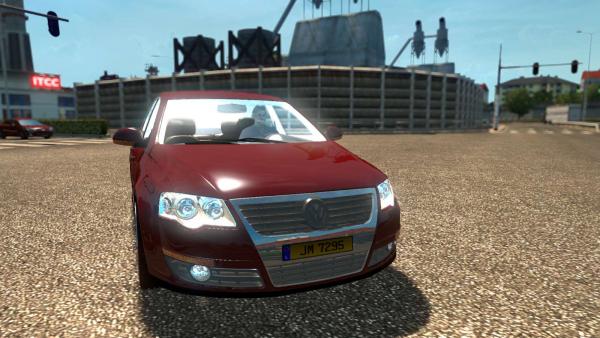 A medium-sized German passenger car, the Volkswagen Passat B6, has been available in many different body styles for many years, with significant changes, from the coupe to the station wagon. One of the most successful was the sixth version of the car, which was presented to the court of motorists in 2005, and was produced for ten years. The car has received more streamlined forms, emphasizing its swiftness and sportiness.

Mod passenger car Volkswagen Passat B6 for Euro Truck Simulator 2 has a body with high detail, the player has the opportunity to paint it in any color you like and use skins. The interior of the car has a very decent appearance, the authors implemented an original instrument panel, and the corporate interior with prescribed animation supports the DLC Cabin Accesories. Unlike Volkswagen Polo, the new Volkswagen has several types of suspensions, low, standard and high, the virtual driver of the ETS 2 simulator can optionally replace the radiator grill logo of the VW auto concern, install a tow bar, covers and inserts and tint external lighting fixtures.