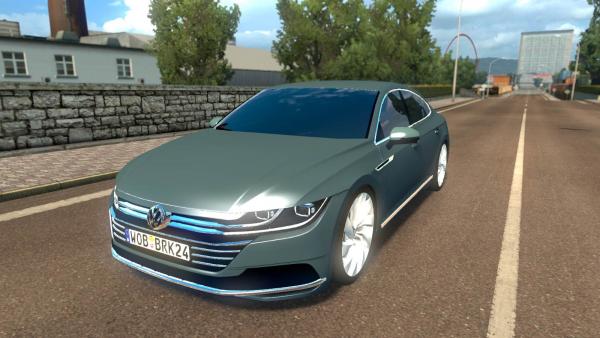 The passenger car Volkswagen Passat CC was developed by the German concern Volkswagen based on the VW Passat B6 Typ 3C. The car was first presented to the court of motorists in 2008. The car has a four-door body with modern design solutions that emphasize its swiftness. The VW Arteon, a business-class car in the liftback type, has been mass-produced since 2017.

The Volkswagen Passat CC 2013 and Volkswagen Arteon passenger car mod for Euro Truck Simulator 2 combines two models of passenger cars at once, which can be selected by replacing the chassis when buying or upgrading in any of the workshops of the ETS 2 simulator. A couple of engines with a capacity of 180 and 220 horsepower and seven-speed ns gearbox. In addition, the modification includes an original detailed interior with prescribed animation and support for DLC Cabin Accessories, as well as a set of its own sounds.