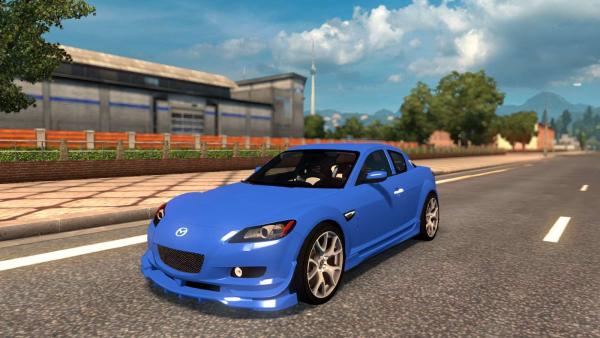 The Japanese sports car Mazda RX-8 was developed by designers at the very beginning of the new millennium, but it was launched into serial production some time later, in 2003. The release of the car with small design and engineering additions was carried out until the end of 2012. The original appearance with a powerful technical filling, like the Porsche Panamera, gives out the individual features of a sports car in a passenger car.

The Mazda RX-8 passenger car model in the 2008 version for Euro Truck Simulator 2 was recreated in the back of a two-door coupe, has a set of original wheels, its own selection of bumpers, spoilers, tuning covers, a set of characteristic sounds and a high-quality interior with prescribed animation. The ETS 2 sim player has six gearboxes and a pair of powerful engines.