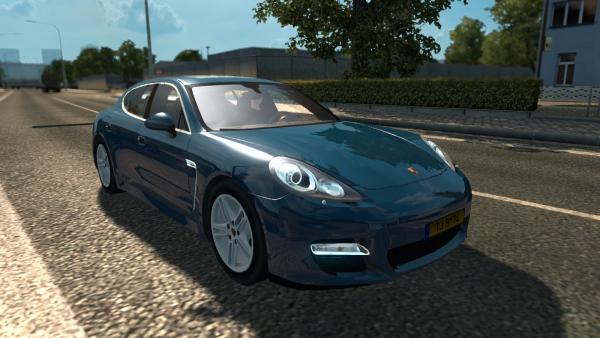 The sports car Porsche Panamera Turbo, whose production began in 2009, is built on the basis of a five-door fastback body. The machine is available with both rear-wheel drive and front-wheel drive, and there are even versions with all-wheel drive, a seven-speed automatic transmission. Over the years of production, the car has gone through several modernizations, and is produced to this day.

The mod of the sports car Porsche Panamera Turbo for Euro Truck Simulator 2 was transferred by the authors from the Forza Motorsport 3 racing simulator, as evidenced by the high quality of the model. The airy silhouette of the body disposes to high-speed racing, which extends the functionality of the game world. ETS 2 virtual drivers will be able to compete in speed with sports cars such as the BMW M4 F82. The set of equipment includes original tires with wheels, and upon purchase the player is given the opportunity to paint in any color, including metallic shades. The developers for sure reproduced the characteristic interior of the cabin with functional mirrors, the animation of the devices, and did not even forget to connect the standard GPS navigator mounted in the panel.

Carrying out the routine work of transporting goods, simulator players sometimes have an acute desire to take a break from cargo transportation and simply drive along the tracks of the simulator in...

The Shelby GT500 is an improved version of the iconic Ford Mustang, featuring more sophisticated technical features and luxury interior and exterior finishes. Car from the movie: Gone in 60 seconds...