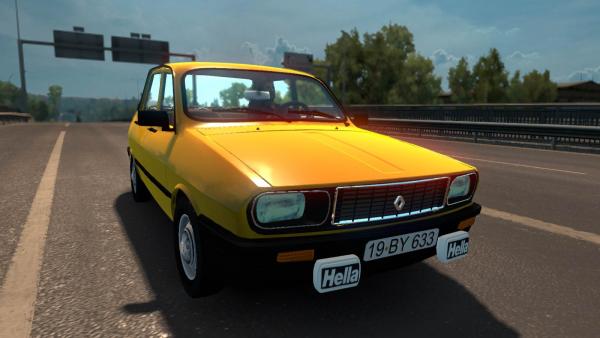 The front-wheel drive car of the second half of the last century, well known for French films with the participation of Jean-Paul Belmondo and other eminent actors, began to be produced in the mid-sixties. The production of passenger cars in France by Renault was carried out until 1980, and in some countries of Eastern Europe and South American states until 2000.

The mod of the Renault 12 car for Euro Truck Simulator 2, like the Hyundai Elantra, has two suspension options: regular and low for lovers of low ground clearance. The authors prescribed their own soundtrack for the two available engines, with a volume of 1.4 liters and a capacity of 72 horsepower. The gearbox is only one, at five speeds. ETS 2 sim player can use a pair of authentic skins. The interior is original, made in high quality and implemented animation. The range of tuning items is quite wide for modifications of this kind, and contains several steering wheels, bumpers, headlights, lighting equipment and some other spare parts.

Another high-quality passenger car model has appeared in the ETS 2 simulator. This time, it is the Honda Civic IES, which has arrived on the virtual roads of Europe, straight from the mid-nineties of...

The South Korean passenger car Hyundai Elantra in a sedan-type body, a conventional and lowered suspension, a well-developed and detailed interior has two types of engines with a volume of 1.8 and...