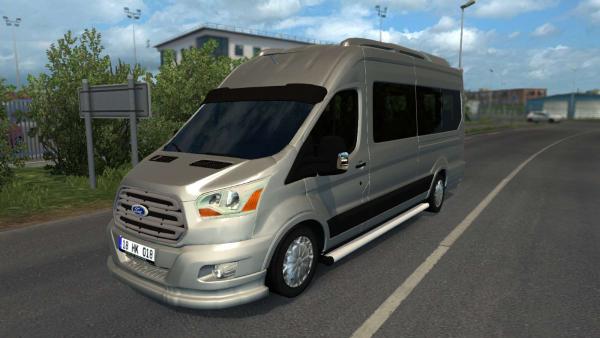 The Ford Transit commercial van series has been known to nearly all freight and passenger carriers for over forty years. Since the release of the first copies of cars, Ford Transit has undergone a huge number of technical and design upgrades. Over the entire time of production, more than six million cars rolled off the assembly line.

The seventh-generation Ford Transit van mod for Euro Truck Simulator 2 is made in pretty good quality. When buying a virtual trucker, a couple of types of suspensions, engines and bodies are available: a minibus and an all-metal van for transportation of small consignments. In addition, in any ETS 2 car dealership, a player can change the exterior of a car from a rich set of components, among which you can find bumpers, radiator grills, sills, headlights and much more. The authors of the modification added several rims and registered the possibility of tinting windows.

The virtual version of Ford fits perfectly not only into the atmosphere of a standard European location, but also, thanks to its high-quality appearance, looks great on the roads of additional mods of author's maps. The interior of the driver’s seat has minor flaws, but the well-implemented Transit management fully compensates for this minor omission.