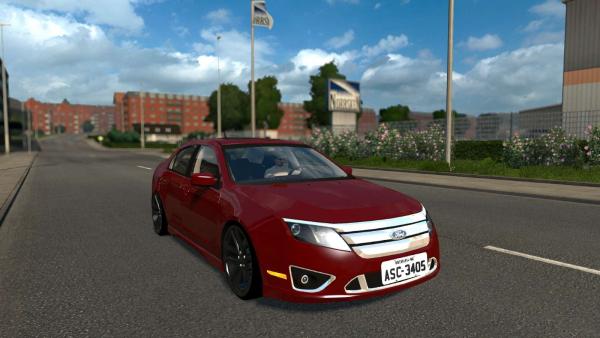 A medium-sized Ford Fusion passenger car began to be mass-produced by Ford since the beginning of 2005. During the production, the passenger car has undergone several versions of restyling and is still rolling off the assembly lines of automobile plants. In our version, we have a not quite ordinary model of a car, but a version produced for the US automobile market, the appearance of which is radically different from cars produced for European countries. It is comparable in size to the Mercedes-Benz C218 and similar elite cars.

The 2010 Ford Fusion US passenger car mod for Euro Truck Simulator 2 was developed using a realistic three-dimensional body model, the author recreated the original high-quality interior with prescribed animation and wiper operation. An engine with a volume of 2.5 liters and a capacity of 173 horsepower is installed under the hood of the car, and six-speed gearbox gives it agility. Unfortunately, the virtual American Ford does not have the opportunity for tuning, but the players of the ETS 2 simulator will like the characteristic passenger physics of behavior and driving.