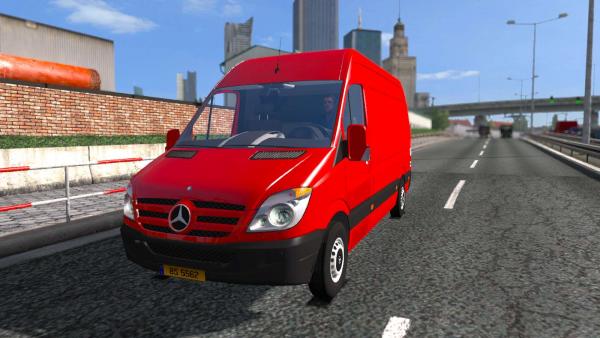 In recent years, the German van Mercedes-Benz Sprinter has been taking a leading position in terms of commercial vehicles in countries such as Russia, Ukraine and many other republics of the former USSR. The main advantage of the car is the high reliability of the body and power units, as well as low-cost maintenance. Mercedes has a more compact size than the Long version, which allows drivers to easily vary in a dense city stream.

The mod of the van Mercedes-Benz Sprinter for Euro Truck Simulator 2 may well contribute to earning in-game currency through cargo transportation using a small trailer. In technical terms, the car has eight engines and three gearboxes. A set of items for external tuning is very modest, but in any garage of the ETS 2 simulator, a player can replace a nameplate, mirrors or a radiator grill.

Dear site user, for cargo transportation by passenger car, do not forget to download and install the mod Passenger trailer for all ETS 2 simulator versions!
Mercedes-Benz van
Previous modNext mod