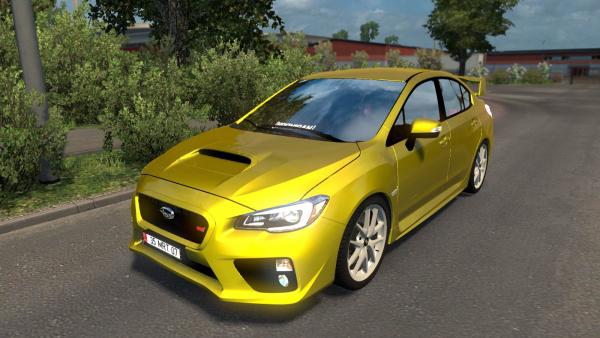 Passenger car Subaru Impreza WRX STi model of 2017 is an improved version of the production car. The designers of Subaru equipped the car with a new engine of 2.0 and 2.5 volumes and improved handling by increasing the stiffness of the suspension.

The mod of the Subaru Impreza WRX STi 2017 passenger car for Euro Truck Simulator 2 was created using the original three-dimensional model, the authors of the modification implemented two engines with a volume of 2.0 and 2.7 liters and a power of 170 and 265 horsepower, respectively. The original interior is presented in high quality with full animation prescribed. The player of the ETS 2 simulator will like the new soundtrack and the possibility of external tuning with a set of six hoods, three types of exhaust pipes, four spoilers and branded stickers on the windshield.

Dear site user, for cargo transportation by passenger car, do not forget to download and install the mod Passenger trailer for all ETS 2 simulator versions!
Subaru cars
Previous modNext mod