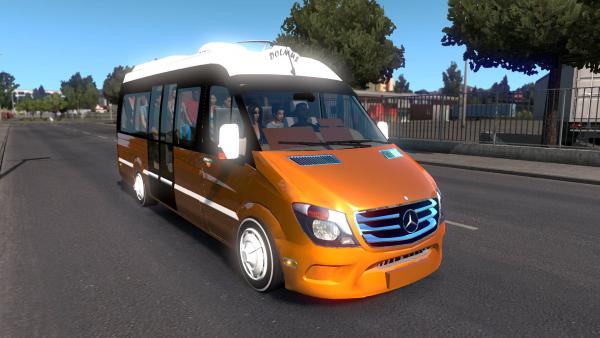 The Mercedes-Benz Sprinter lineup of small vehicles has been produced for several years not only in Germany, but also assembled at numerous Mercedes branches located around the world. Modifications include several options for vehicles, such as minibuses, all-metal vans, small trucks, tow trucks, emergency vehicles and other types of vehicles.

The mod of the passenger minibus Mercedes-Benz Sprinter, model of 2017 for Euro Truck Simulator 2 has a pretty good set of elements for external tuning, among which you can find wheels, tires, radiator grills, covers, moldings, spoilers and other useful spare parts. The appearance of the bus is peculiar, thanks to the two-tone coloring of the body. The player of the ETS 2 simulator can choose the interior of the cabin with animation, from the two options presented, and equip with the engine, from a pair of available, and a six-speed gearbox.

Dear site user, for cargo transportation by passenger car, do not forget to download and install the mod Passenger trailer for all ETS 2 simulator versions!
minibus Mercedes-Benz
Previous modNext mod

The German commercial van Mercedes-Benz Sprinter is increasingly conquering the vast expanses of roads around the world, this time it got to the virtual European routes of the ETS 2 simulator. The...