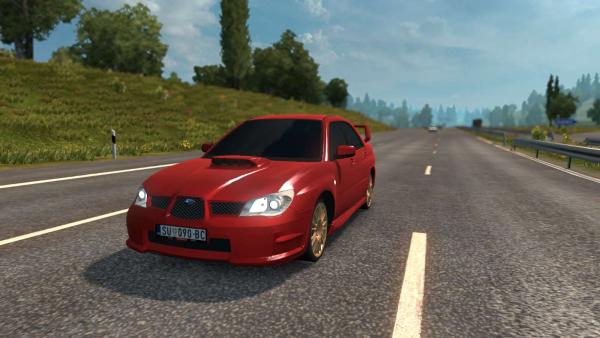 The Japanese car Subaru Impreza WRX STi is a sports version of the regular production car Subaru Impreza, the hallmark of which is a more powerful engine and enhanced suspension, the dynamics of which can be experienced on the racetrack. The car left the assembly line for the first time in the first half of the nineties of the last century, was produced for twenty-three years and underwent several restylings and three upgrades.

The second-generation Subaru WRX STi passenger car mod for Euro Truck Simulator 2 in the back of the 2005 model includes two engines with a volume of 2.0 and 2.5 liters, an original interior with its own animation, and branded wheels with tires. If desired, when buying at a car dealership or tuning in the garage, the player of the ETS 2 simulator has the option of choosing or replacing the suspension from the two options presented, underestimated or normal.

Dear site user, for cargo transportation by passenger car, do not forget to download and install the mod Passenger trailer for all ETS 2 simulator versions!
cars Subaru
Previous modNext mod

Passenger car Subaru Impreza WRX STi 2017 created using the original three-dimensional model. When buying a car, you can equip one of the supplied engines with a volume of 2.0 and 2.7 liters with...