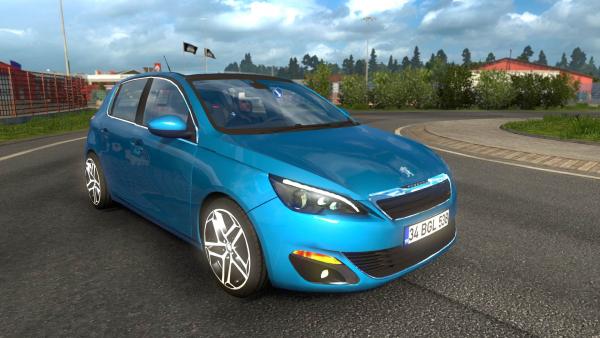 Peugeot 308 passenger car first left the gates of the Peugeot factory in 2007. Over the years of production, the car was produced in almost all body styles, and gained unprecedented popularity. For example, in our country, in terms of sales, the car competed with such a hit as Renault Megane.

The Peugeot 308 passenger car mod in the back of a five-door hatchback for Euro Truck Simulator 2, unfortunately, does not have its own tuning, but the original engines of 1.6 and 1.8 liters, as well as the characteristic six-speed gearbox, will alleviate this drawback. In addition, the players of the ETS 2 simulator will be greatly enhanced by their own interior with realized animations and company wheels with tires.

Dear site user, for cargo transportation by passenger car, do not forget to download and install the mod Passenger trailer for all ETS 2 simulator versions!
Peugeot cars
Previous modNext mod

The modable BMW M5 E34 passenger car is now available in ETS 2. The excellent appearance and sophisticated interior interior will not leave fans of the simulator indifferent. Indeed, for players...