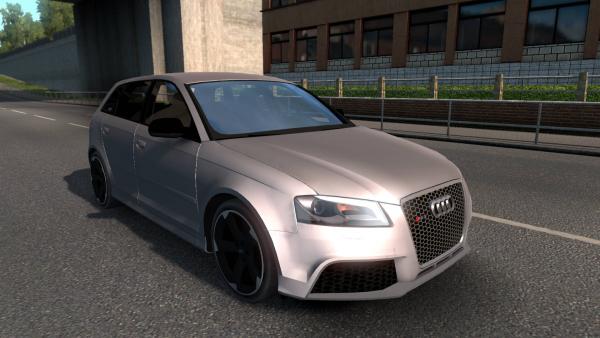 Sports version of the production car Audi RS3 hatchback is equipped with all-wheel drive system and has tangible speed characteristics, significantly exceeding the values of conventional cars of the same model. Rapid features of the body give a noble breed of this German car.

Mod passenger car Audi RS3 Sportback for Euro Truck Simulator 2, the sample of the first generation, produced since 2011, created using a realistic three-dimensional model, externally the car has a lot in common Audi S4. The virtual version of the Audi has its own animated interior, a pair of suspensions, with standard clearance and understated, the original 340 horsepower engine and gearbox at seven speeds, animation of exhaust smoke and a characteristic set of authentic sounds. If desired, the player simulator ETS 2 can tinted glass and replace the bumper pads.

The German crossover Audi Q7 is far from ideal, however, in this form it will be enthusiastically greeted by the players of the ETS 2 simulator, because a passenger car can be painted in any color....