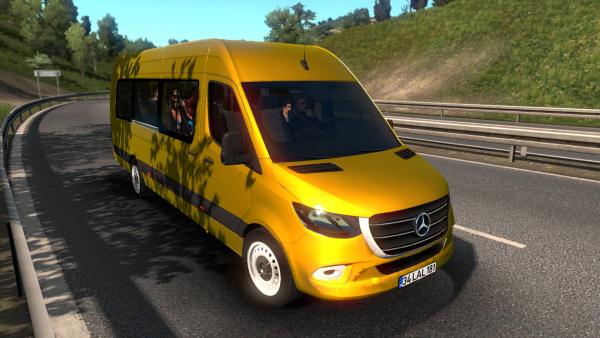 The third generation of the popular Mercedes-Benz Sprinter family of small vans began production on the German automotive giant Mercedes in February 2018. Their popularity breaks all records among vans and minibuses of this class.

The car mod Mercedes-Benz Sprinter for Euro Truck Simulator 2 is made in two versions, a van and a minibus with passengers. The authors realized the original interior of the cabin with animation, a couple of engines, and the same number of gearboxes at 6 and 7 speeds. For fans of earning in-game currency in ETS 2, it is possible to tow a car trailer. The developers of the add-on did not ignore the admissibility of tuning, adding several types of rims and bumpers to the modification.

Additionally, you can download the Russian license plate from this link.

The sports car Mercedes-Benz 300SL, from the German company Mercedes, in the ETS 2 simulator has a photographically accurate appearance and a classic interior, thanks to a high-quality...

The 2018-2019 Mercedes-Benz Vito passenger minibus begins its working life on the virtual roads of Euro Truck Simulator 2. The car's mod was made in excellent quality, a highly detailed...

The German commercial van Mercedes-Benz Sprinter is increasingly conquering the vast expanses of roads around the world, this time it got to the virtual European routes of the ETS 2 simulator. The...