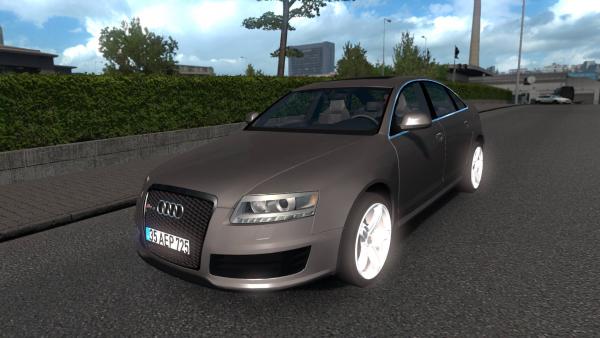 The sports car Audi RS6 in the back of a four-door sedan with its appearance has a lot of similarities in design with the more advanced fellow Audi RS7. The second-generation Audi car was produced between 2008 and 2010, and was extremely popular among lovers of luxury cars.

The Audi RS6 passenger car mod for Euro Truck Simulator 2 includes a highly detailed body and interior with animations, a couple of suspension types, conventional and understated, two engine options with a capacity of 580 horsepower, with its own sounds, and a six-speed gearbox. The player of the ETS 2 simulator also has external tuning, among spare parts you can find several types of tires with disks, radiator grills, in addition, tinting of headlights and windows is possible.