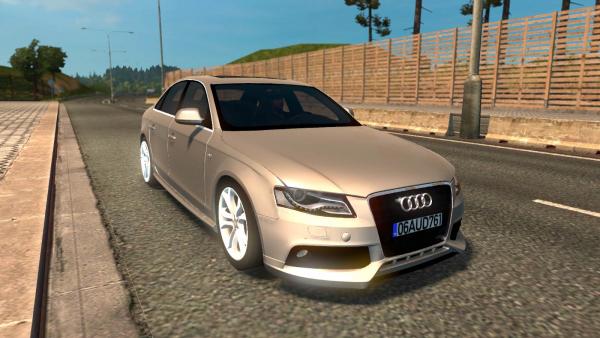 The Audi S4 is the sports version of the popular Audi 100 passenger car. Unlike the standard serial weaving, the sedan was equipped with a compression engine, automatic transmission and four-wheel drive system. The car body has many similarities with a passenger car of a similar class RS4, emphasizing speed and swiftness.

The mod of the Audi S4 passenger car for Euro Truck Simulator 2 is based on a high-quality three-dimensional model, characterized by a characteristic realistic appearance. Technical stuffing is represented by a single engine with a capacity of 333 horsepower and a single six-speed gearbox, the dynamics of which can be estimated on the racetrack. There is no possibility of external tuning, however, the player of the ETS 2 simulator has an alternative to choosing a set of wheels on branded disks, from the three available options. Of particular note is the original interior with true animation.