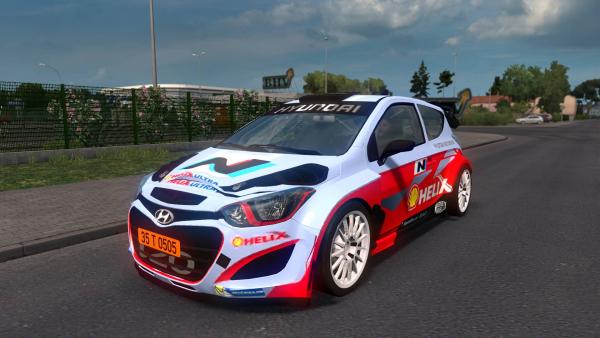 The Hyundai i20 WRC rally sports car was designed by Hyundai on the basis of a serial hatchback car. The car was specially designed to compete in the 2014 World Rally Championship.

The Hyundai i20 WRC passenger car mod for Euro Truck Simulator 2 is of high quality, thanks to a detailed three-dimensional body model with a reinforced safety cage, and a branded body paint. Particularly noteworthy is its own physics, which players of the ETS 2 simulator can test on the testing ground. On the technical side, a bunch of 220 horsepower engine and a six-speed gearbox have been implemented, and a pair of sports skins have been added to give individuality to the car's appearance.

And for lovers of Russian maps, an additional Russian issue was prepared, which can be downloaded from this link. You should know that when connecting the add-on, the license plate file must be higher than the main mod.

Dear site user, for cargo transportation by passenger car, do not forget to download and install the mod Passenger trailer for all ETS 2 simulator versions!
Hyundai cars
Previous modNext mod

The beautiful and high-quality mod of the Hyundai Universe bus in the ETS 2 simulator looks very realistic, thanks to an excellently executed three-dimensional body model and a colorful skin. On the...

The Spanish passenger car SEAT Leon III in the gaming world of the ETS 2 simulator has a photographic resemblance to a real prototype. The mod was created using a highly detailed three-dimensional...