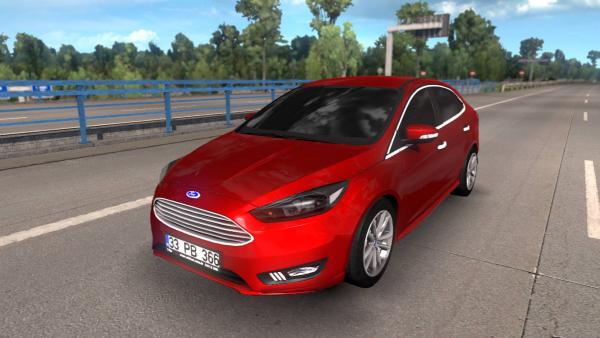 The Ford Focus family of compact cars has been produced by the American company Ford since 1998. Throughout the entire production period, the car has gained the same general recognition in the EU, Russia and the republics of the former USSR, as the Ford Crown Victoria in the USA.

Mod of a passenger car Ford Focus Mk3.5 for Euro Truck Simulator 2 is made in high quality. The authors have implemented a detailed original interior with full animation, support for external tuning and the ability to tow a light trailer. Under the hood of the car, the ETS 2 player can install a gasoline or diesel engine with a capacity of 125 horsepower with its own set of sound effects, and choose a five-speed gearbox.

The rich arsenal of tuning items includes a pair of spoilers, two radiator grilles, several types of headlights and taillights, as well as bumper covers.

The Ford Transit Connect commercial vehicle mod will be a nice addition to the ETS 2 simulator. The high-quality three-dimensional model of the body provides the vehicle with photographic accuracy...