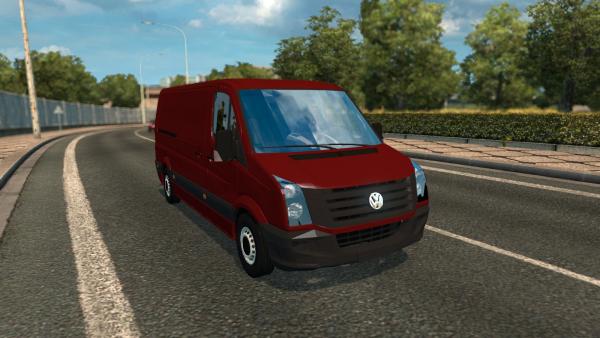 The Volkswagen Crafter series of commercial vehicles is produced in various body styles; engineers are developing more and more modifications, ranging from small city vans to passenger minibuses. There is considerable competition among similar cars, and to get around the closest favorites in the person of Renualt L2H2 and similar ones, manufacturers have to work hard.

The mod of the commercial Volkswagen Crafter van for Euro Truck Simulator 2 will be a very good addition to the already existing cars in the ETS 2. An excellently executed three-dimensional model of the car will fit perfectly into the world of virtual roads of the simulator. Unfortunately, in addition to painting the body in the desired color, Volkswagen completely lacks the possibility of external tuning, however, several types of engines of different power with their own set of sound effects, and two gearboxes make up for this small drawback. The trucker is given the opportunity to choose four options for the interior of the cabin with functioning devices on the panel, its own workable proprietary GPS navigator, and you can even find a mounted car radio.

Dear site user, for cargo transportation by passenger car, do not forget to download and install the mod Passenger trailer for all ETS 2 simulator versions!
Volkswagen van
Previous modNext mod

GMC Savana cars, manufactured by General Motors, have quite firmly conquered the commercial transportation market in the countries of North America, and now, thanks to the creators of the...