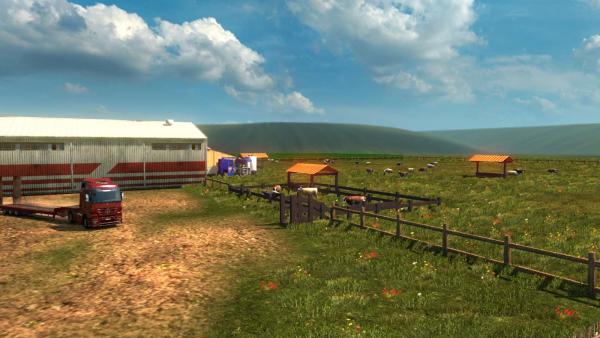 Oddly enough, some of the most popular copyright locations are maps of Brazil, although initially the ETS 2 simulator was created exclusively with the territories of European countries. In this supplement, the author decided to move away from the standard principles and implement the rural area of the South American country.

The mod of the map of the Brazilian countryside hacienda under the original name Mapa Fazenda (MF) for Euro Truck Simulator 2 takes the player into the exotic world of the country of eternal summer. The developer transferred the whole flavor and originality of suburban life to the virtual game world, as new versions of the add-on were released, the map increased significantly, new settlements, farms, buildings appeared, the length and complexity of roads increased. The virtual trucker is expected to have difficult tasks, wide paved roads will be replaced by country dirt roads with obstacles in the form of agricultural and other equipment, water barriers, which you will have to wade with great caution, which makes the updated game noticeably more interesting and fascinating. In addition, special goods and trailers for agricultural purposes are prescribed in mod.

The supplement is autonomous, therefore, to travel around a rural location, you need to create a new profile and select the appropriate location.

Dear user of the site, carrying out the transportation of goods across the expanses of Russian maps, to enhance the effect of realism, we recommend you to download and install the mod Russian radio stations for all versions of the simulator ETS 2!
new maps Brazil countryside
Previous modNext mod