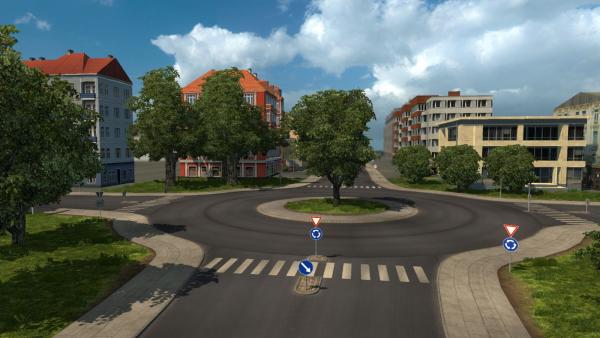 Each player plowing the vast expanses of virtual roads of Europe probably repeatedly thought that many European countries were bypassed by developers who did not implement them in the game. But to the delight of the players, there are a lot of fans of the ETS 2 simulator who decided to correct this mistake, among them a team of authors who created and continue to develop the Northern Scandinavia mod, which includes countries such as Finland, Norway and Sweden located on the Scandinavian peninsula.

The map mod of Northern Scandinavia for Euro Truck Simulator 2 was created using natural cartographic schemes and real photographs, which allowed the additional location to be brought as close to reality as possible. Virtual truckers on the way expect incredibly spectacular landscapes of the surrounding nature, coastal routes are replaced by mountain tunnels, specific small villages and large cities convey the unique flavor of the northern part of Europe. Drivers have to overcome a number of picturesque roads of the new ETS 2 location, and it is best to make trips on Finnish-made tractors Sisu R500, C500 or C600, as the country of origin is one of those that was implemented in the new map, and the car will look great against the background native landscape.

It is important for players to know that the mod is autonomous, therefore, to start the gameplay, you need to select the NorthernScandinavia.mbd file and start a new game, as well as the DLC Scandinavia must be installed and activated in the simulator.