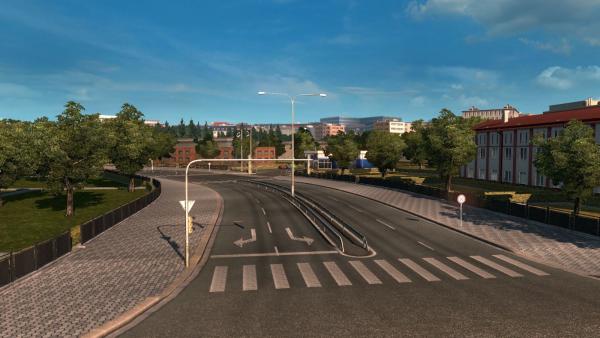 A large-scale, widely known among fans of Euro Truck Simulator 2, map of Brazil, created by a professional team of developers of modifications for the ETS 2 simulator - EAA Team. The impressive size of the map is constantly growing, modifying and used in other global projects, such as passenger transportation in Brazil.

Since the release of the first version of the add-on, the location has increased significantly, and regular cities, motorways, towns, and related roadside buildings and infrastructure have been added. Currently, there are more than seventy new cities and thousands of kilometers of updated and constructed tracks. The originality of the surrounding area is fully consistent with the real landscapes of the region. A virtual trucker is waiting for colorful original settlements, mountain roads, full-flowing rivers, transport interchanges and even a car factory. Colorful sunsets and sunrises will leave a lot of pleasant emotions, and riding on night roads will make you appreciate this wonderful mod.

In version 5.0.1 Alpha mod, an addon for the original EAA cargo was added.

The following file attachment procedure must be observed:

The map of the South American Republic of Peru impresses with the beauty of the landscape. The driver will encounter green plains, clean raging rivers, mountain ranges, shady dense forests, bridges,...