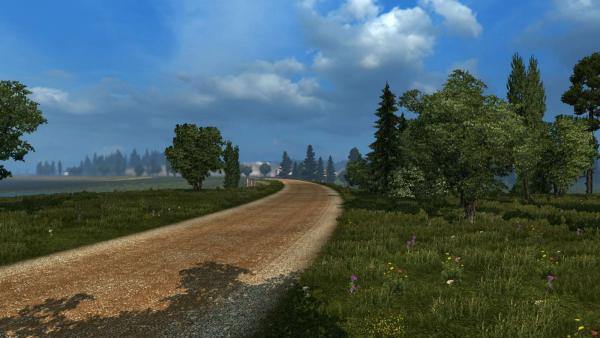 Experienced ETS 2 players could hear about the Russian Open Spaces project, which appeared a long time ago, but only now has received innovations. In it, a map of Russia was prepared for players, allowing you to visit more than 50 cities of our vast country. The road surface was updated, new transport interchanges appeared that meet the requirements of Russian standards. During working trips, you will see many fresh buildings, factories, shops, factories. If you already managed to test the Eastern Express map mod, then to enhance the effect, try the new author's addition.

Install the map mod Russian Open spaces 2.3 is worth it if you have already updated the game Euro Truck Simulator 2 to 1.20 or 1.21 versions. The features of the addition include climate innovations. It will change, relying on our location. For example, if you go to the South, then you will meet hot and sunny weather, but in the North you will have to deal with snowfall and ice. When performing certain routes, you will have to meet off-road, not the most successful gravel, well, everything is as in Russian realities!

Such large northern cities as Surgut, Khanty-Mansiysk, Tobolsk will appear in the ETS 2 simulator. There will be smaller cities. In total, the add-on gives the player the opportunity to cover about 6 thousand kilometers. Therefore, it is unlikely to fully get acquainted with all the delights of an addition in one route!

As for the version of the map of Russian Open spaces 3.0, there is no particular difference in size. The number of settlements is the same. But specifically, the quality of the map has grown.

Now the mod supports the 1.22 version of the game, it has been optimized, due to which stability problems have disappeared. On the way, you will find a large number of simulated structures and animated scenes from an accident. There will be traffic police posts, gas stations, shops for motorists, large and not very bridges. You will stumble upon both a luxurious highway and a broken asphalt pavement.

Now about the 4.0 version. In part, an update appeared to work with the updated Euro Truck Simulator 2 1.27 patch. The developers also fixed the bugs and added some interesting things. Road traffic replenished with police cars. A trucker can stumble upon a series of buses moving along the same route. Driving close to military units, there is a corresponding technique.

No less interesting is version 5.0 of the Russian open spaces. Here, the driver receives 63 small settlements, will be able to look into the interesting city of Kineshma, four fresh companies, SCANIA and Universal wagons have appeared in it. There is now a tow truck, which was built on the basis of a tractor of this brand. It copes with towing large loads. Tractors with goods will also be in traffic. All shortcomings from version 4.0 have been fixed.

And finally 5.2 version of the Russian open spaces. This is the most current update and among Russian users one of the most popular add-ons. In addition to the fact that there are more than 50 cities, they are also divided by climatic zones. In the North, snow and blizzard, and in the South, heat and sun. In territories of excellent quality, the original prefabs, objects and buildings are not duplicated. You will see beautiful architecture, modern roads, properly constructed road junctions. Added a lot of signs, new gas stations. On the way, there will even be sawmills and small bases, not to mention larger enterprises. Traffic expanded and expanded.

Well, in the new version of Russian Open spaces 5.5, we are waiting for a correction with FPS drawdown, an improved port in Severodvinsk with new ferries, the transport company Spec Transport was added, and in addition new prefabs, traffic lights and map optimization.

For the updated version 1.31 of the simulator, the authors released an updated mod of Russian Open spaces 6.0, fully adapted to the new realities of ETS 2.

In the new version of map 7.0, a new settlement Kineshma and several transport companies have appeared. In addition, Scania tow truck with its original tasks for towing faulty vehicles was registered, as well as the authors corrected all previously identified errors.

In version 7.1 of the map, a new city of Kineshma and such companies as Tug, Car Service, Open spaces of Russia, Tow Truck were added. A tow truck based on the Scania tractor was added to the Scania and Universal dealerships, with the help of which it is possible to carry out tasks on towing faulty automotive equipment, and tractors carrying original map loads are registered in the traffic. In addition, the errors of the previous version were fixed.

For the map to function stably, do not forget to install the DLC Going East add-on.

Below are some useful fixes and add-ons:

Dear user of the site, carrying out the transportation of goods across the expanses of Russian maps, to enhance the effect of realism, we recommend you to download and install the mod Russian radio stations for all versions of the simulator ETS 2!
new maps russian map
Previous modNext mod

New editions of the Eastern Express map will immerse the player in a new, original and colorful world of domestic roads. Truckers are given the opportunity to visit three CIS countries: Ukraine,...

The mod is designed to add maximum realism to the gameplay. After installing the add-on for a trucker, it will be much more difficult to complete tasks, since the employer will not provide new...

The Mild Winter Weather add-on immerses the standard world of virtual road simulator in a period more similar to late autumn or early spring. A well-prescribed daylight length and seasonal...