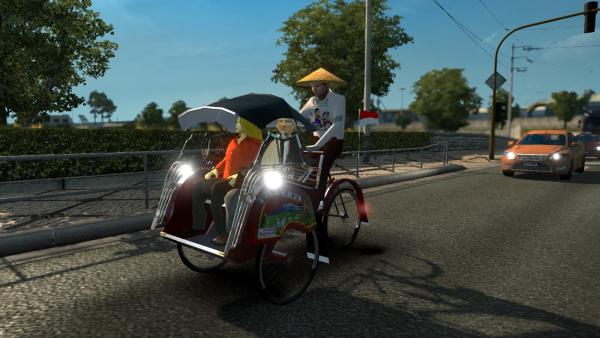 Have you heard about this form of transport like a rickshaw? This is a kind of passenger transport, mainly common in the countries of South and East Asia. The modification of the carts is very diverse, but the essence is one, the driver itself is the power drive, that is, it can be a single or double cart with shafts, into which the cab harnesses. Or with a chain transmission, in the movement of which the driver himself also participates by turning the pedals.

The mod rickshaw in traffic for Euro Truck Simulator 2 adds unusual transport to city roads. For additional locations such as the map of Indonesia, such a bicycle transport will look just right, but on the roads of Europe it looks very strange and exotic. But still, to give a variety of vehicles, we recommend installing this add-on in the ETS 2 simulator.

Dear user of the site, choosing your favorite number and variety of vehicles on the road, we recommend you to download and install additional map for your version of the simulator ETS 2!
rickshaw traffic
Previous modNext mod

A new and unusual form of transport may appear on the roads of the simulator, thanks to a new mod that adds a tractor with trailers to the game. The add-on is universal, and works both on standard...