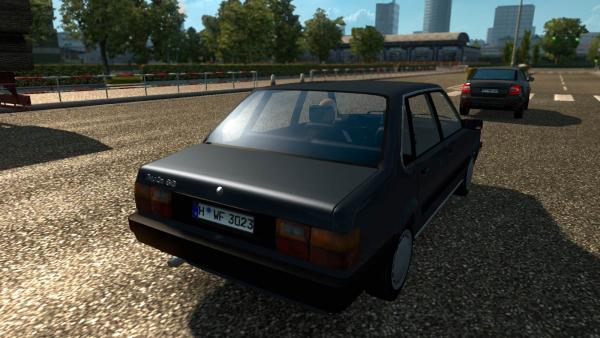 The classic transport mod, with the original name Classic Cars Traffic Pack, supplements the standard traffic of the ETS 2 simulator with new passenger cars that flooded the roads of Europe in the 60s and 80s of the last century. All cars are pretty well detailed and have good optimization. Among the cars you can see the Audi 80, which is not uncommon today, as well as rarities such as the Volkswagen Kafer, Trabant 601 and other representatives of retro cars.

In total, at the time of release, the mod of the classic transport in traffic for Euro Truck Simulator 2 has 11 models of cars, but as follows from the author’s messages, the fleet will expand significantly with the release of new versions.

At the time of the release of the latest version of the mod, the pack was significantly supplemented by new classic cars, including Soviet-made ones, up to 116 cars.

In addition, you can optionally install a pack of sounds version 4.0. When connecting, priority must be observed! You can download the sound pack at this link.

Dear user of the site, choosing your favorite number and variety of vehicles on the road, we recommend you to download and install additional map for your version of the simulator ETS 2!
traffic cars pack
Previous modNext mod

It's time to diversify the bored stream of standard faceless passenger cars. A new addition will help us in this, which adds a ton of passenger cars of well-known foreign manufacturers to standard...