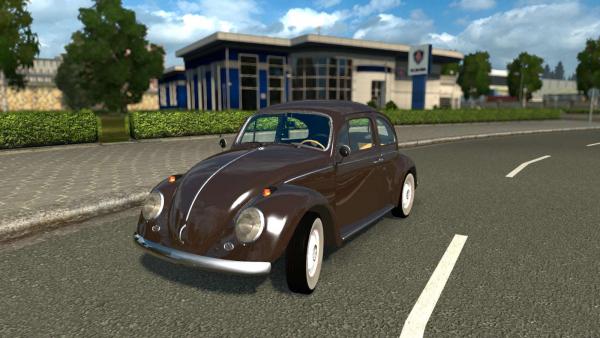 The most massive in the history of automotive industry and the record holder of the Guinness Book of Records, the legendary folk car Volkswagen Kafer, better known to motorists as the Beetle, began its history back in 1938. Automobile production continued for several decades, until 2003, and over the entire time of production, more than 21.5 million units of vehicles rolled off the assembly line. The car was popular not only in Europe, but also firmly won the hearts of the inhabitants of South America, where it is still very popular, so maps of Brazil on any roads will look very handy.

The mod of the Volkswagen Kafer passenger car for Euro Truck Simulator 2 is made in high quality, although this is just the first version of the add-on, but virtual drivers of the ETS 2 simulator will like it. When developing, the authors used a high-quality model, the player has a choice of two interior options, budget or luxury, with wood trim and lever animation, where a GPS navigator can be placed on the windshield. Of the tuning items, only the roof rack is available. The beetle has its own set of sounds and original physics of behavior, which gives the control maximum convenience, comfort and reliability.

GMC Savana cars, manufactured by General Motors, have quite firmly conquered the commercial transportation market in the countries of North America, and now, thanks to the creators of the...