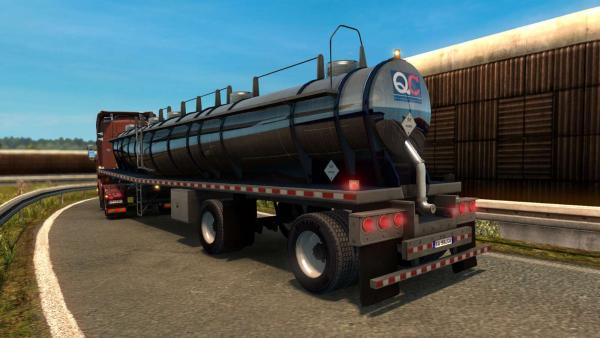 Many fans of the ATS simulator noticed the characteristic quality of tanks in the game. Trailers for transporting liquid cargo are distinguished by their quality and originality, as well as as close as possible to real prototypes.

The tank mod from ATS for Euro Truck Simulator 2 is made in a typical ETS 2 property, with observance of the characteristic dimensions. The modification contains nine tanks with logos known not only in the United States, but also in many other countries of the oil and construction corporations. Semi-trailers for liquid cargo are built on a chassis with two, three and four axles, the mass of which varies from 18 to 27 tons. The add-on is fully compatible with similar author's modifications of additional trailers. A distinctive feature of the mod is that the new semi-trailers are registered not only in the tasks of transport companies, but are also present in traffic.

Dear site user, having installed suitable loads and trailers in the game, we recommend to download and install powerful trucks for your version of ETS simulator 2!
cargo trailers tanks
Previous modNext mod