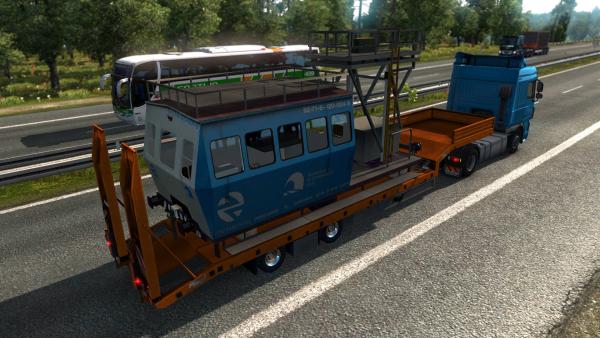 Cargo transportation is what attracts fans of the ETS 2 simulator in the gameplay the most. However, to date, the number of standard semi-trailers is no longer suitable for players, and therefore, many new trailers, for example, the Finnish company VAK or Menci tanks, and the like, with their own cargoes and tasks, appear by the forces of modification developers.

The Railway Cargo Pack mod for Euro Truck Simulator 2 adds its own rail trailers to the game world. On the platforms you can find not only wagons and locomotives of different time intervals, but also instances of urban rail transport, such as trams or subway cars. The add-on is completely autonomous, is registered in tasks and traffic, and works on all known maps.

The pack is compatible with all mods from Jazzycat, and there are also English and Russian versions, the connection order of which is described below:

For the English version, you must have two files in the mod folder:

For the Russian version, there must be two files in the mod folder:

The Cistern Menci mod, adding new high-quality tanks to the ETS 2 simulator game world, will be an excellent gift for lovers of new loads and trailers. All tanks are available for purchase and added...