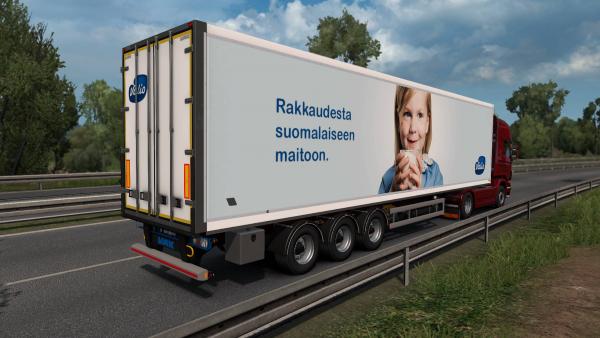 Each player of the ETS 2 simulator wants to bring the game world closer to realism. And in this he is helped by numerous mods, including trailers with oversized cargo.

The mod of trailers of the Finnish company VAK for Euro Truck Simulator 2 adds to the game high-quality trailers with a height of 4 and 4.4 meters, available for purchase in the property. In total, 14 trailers were sold on a chassis with two, three, four and five axles, including a container ship, refrigerated trucks, curtainsider semi-trailers and with sliding doors, and even double couplings. Original wheels were installed on all trailers, tuning support was registered, and skins with logos of really existing companies widely known in the European Union were added.

All trailers are completely independent and support features such as advanced hitching, animation of cables and supports, rotary and lifting axles.

For the mod to work fully, it is necessary to additionally install an addon into the game that adds tandem VAK trailers, which you can download from the links located below:

Important!!! The addition of tandem VAK trailers only works with the main mod!

Dear site user, having installed suitable loads and trailers in the game, we recommend to download and install powerful trucks for your version of ETS simulator 2!
trailers realism
Previous modNext mod

The Cistern Menci mod, adding new high-quality tanks to the ETS 2 simulator game world, will be an excellent gift for lovers of new loads and trailers. All tanks are available for purchase and added...