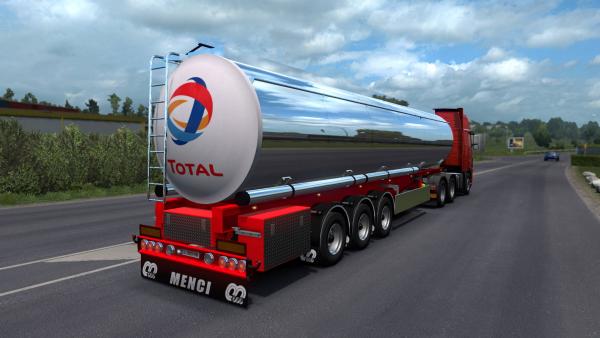 Each player of the ETS 2 simulator dreams of a variety of traffic and new loads and trailers, especially high-quality ones, as close to realistic as possible. For older versions of the game, the mod authors have already created a pack of tanks, and here is a new addition that brings significant diversity to the gameplay.

The Cistern Menci mod for Euro Truck Simulator 2 adds new high-quality tanks to the game, which are practically indistinguishable from the actual ones available for purchase in the property and registered in the traffic. New trailers are fully adapted to the latest versions of the game, have lifting axles, advanced coupling, support animation, cable support. There is a choice of chrome or painted tanks, and there are also four skins.

In addition, in addition there is the opportunity to create your own skins using templates that can be downloaded here.

Well, that’s not all. For transportation, a pack of autonomous food and dangerous goods for the Menci tank has been prepared, which can be downloaded at the links located below:

Dear site user, having installed suitable loads and trailers in the game, we recommend to download and install powerful trucks for your version of ETS simulator 2!
cargo tanks trailers
Previous modNext mod

When transporting hazardous substances, flammable liquids and bulky goods, the driver is required to install on the cab and turn on orange flashing lights. In the standard version, there are not very...