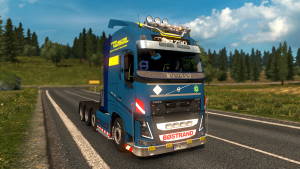 Tuning cars in the case of Euro Truck Simulator 2 is almost an elementary task. Since the mods will do all the work for you, you just need to install them, which will take no more than a few minutes. New parts for ETS 2 are regularly released, which adds realism to the game world. There are decorations to highlight the visual beauty of any vehicle. Mods aimed at visualizing trucks and other cars are more than enough. We publish updates for Euro Truck Simulator 2 in a timely manner so that you improve your cars the way you want them to be. We wish you a pleasant long journey on the dimensional transport! 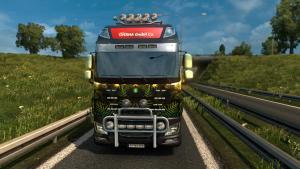 The new mod of additional elements for tuning from Ohaha will help the virtual trucker to give the standard DAF XF Euro 6 tractor a unique look not only externally, but to diversify the interior of the driver’s cab interior. There are many elements of decor, the player will easily pick up everything you need to your liking. Having driven the car into the garage, the driver can change it beyond recognition, because mirrors, radiator grilles, side skirts and much more are available. 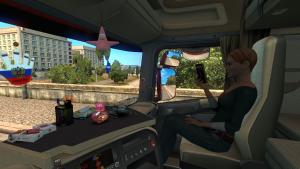 SiSL's Mega Pack - Star Wars DLC adds to the simulator a huge number of objects placed in the driver's cabin, including an incredible assortment of mobile phones, tablets, soft toys, drink cans, magazines, air flavors and much more. In addition, the driver is given the opportunity to put a companion next to him, including pretty girls, a forwarder and even a character in a popular computer game. 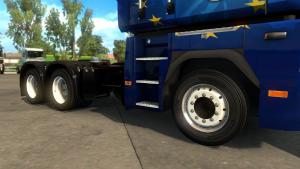 Although the ETS 2 simulator has a large number of standard tire models, a real trucker still wants to give more personality and realism to his truck, just for them the author’s mod was created: Pak 50K and Realistic tires. After its installation at the disposal of the player will appear over thirty front and more than twenty rear tires. The new wheels are produced by the most famous brands like Continental and Yokohama. 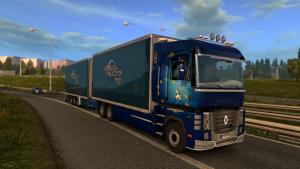 Extensive functionality that allows the player to install a new updated BDF frame on his truck. After modification, the virtual trucker will be able to transport goods on new types of trailers in tandem. The supplement significantly expands the possibilities and increases interest in the game. Transportation will become much more diverse, as the transportation of new goods as part of a road train complicates the execution of tasks, making the gameplay more realistic. 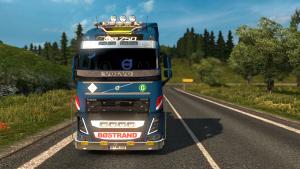 Finally, the truckers of the simulator eagerly awaited the next creation from Ohaha, this time the Volvo FH16 2013 tractor was updated globally. In the new version of the truck, the player expects an incredible amount of new parts, items and slots for installing new lighting equipment. The player will be able to unrecognizably adorn his steel horse, because the kit contains body kits, frames, new engines, visors, mirrors and much more. 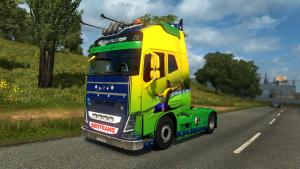 If you are a fan of the standard truck Volvo FH 2012, then the modification is specially for you. Indeed, a new set of spare parts will significantly improve the appearance of your steel friend. In the set you can find new radiator grilles, including plastic, painted and chrome versions, all kinds of models of skirts, inserts, lighting and much more. Feel free to download the mod, install, and go to the tuning workshop! 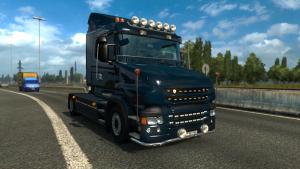 The new mod is able to turn the Scania tractor into an elite heavy truck. A wide range of spare parts provides the player with an unrecognizable ability to decorate his truck, in the set you can find just a huge number of plastic parts that can be painted, all kinds of lighting equipment, but the new mod does not end there, in addition to the driver, a set for technical stuffing from engines, chassis and gearboxes. 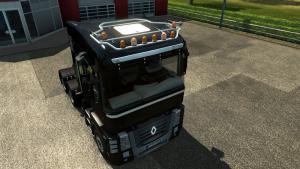 When transporting hazardous substances, flammable liquids and bulky goods, the driver is required to install on the cab and turn on orange flashing lights. In the standard version, there are not very many of them available, but with the new mod their number and variety will increase significantly, in addition to ordinary flashing lights, there are also closed with a grid of yellow, white and black colors. In addition, there is a marking plate at the base of each. 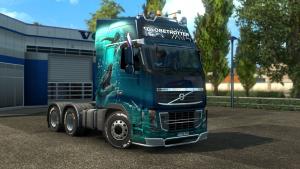 Tired of a meager standard set of spare parts and tuning? Then, specially for you, the famous Ohaha modmaker developed a new addition for the default truck Volvo FH16 2009. With it, any player will be able to change his vehicle beyond recognition. The new kit contains a bunch of skins, new chassis and cabs, interior interiors, exhaust systems, stickers, lighting fixtures, since many slots have been prepared for this.