обновите на 1.40...
WE IN VK
SUBSCRIBE
Mods for ETS 2 simulator / All trucks / World trucks / Scania 143M with trailer and skin 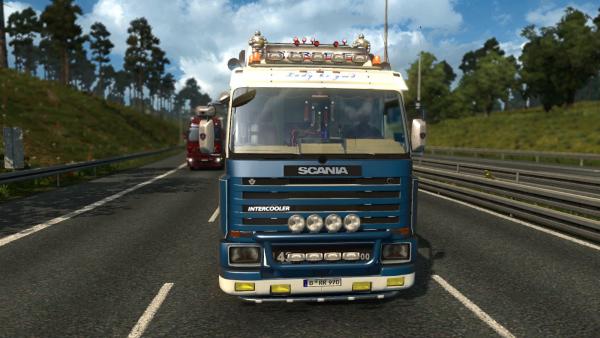 The Scania 143M commercial tractor, developed in the first half of the eighties, has been produced for over fifteen years. For their maneuverability, unpretentiousness and efficiency, many domestic truckers nicknamed the Scania model of a car of the century, and as you know, popular recognition is the best award.

The mod of the commercial Scania 143M truck for Euro Truck Simulator 2 is constantly being improved and improved by the authors, from the moment the first version of the add-on is released to the last, something is constantly added, changed and fixed. In the presence of five types of cabs, eight chassis options, four types of interior interior, and even a set of spare parts for tuning can not be counted. On a new truck it will be very nice to travel on a map of Italy. The virtual trucker of the ETS 2 simulator is given the opportunity to decorate your car according to your individual taste, and of course, the characteristic sound range is assigned to the truck.

In addition, the modification at will can be supplemented with an original skin and an individual trailer, which can be download here.