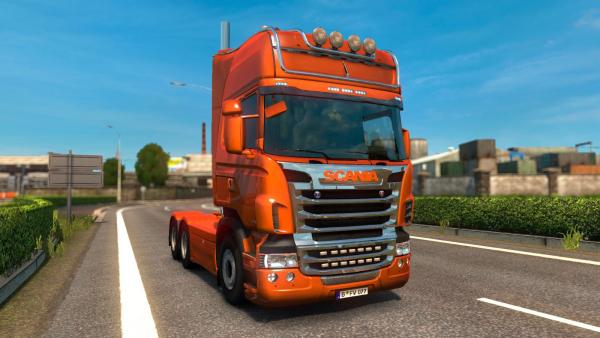 The Scania R & Streamline Modifications mod is designed to create a unique look for the standard Scania R and Streamline tractors. But the uniqueness of the modification lies in the fact that after activating the add-on in Euro Truck Simulator 2 dealerships, a new truck model called Scania R (RJL) will become available for sale, which has a huge set of individual attributes for external and internal tuning, as well as a package that increases power and patency of the car.

The new truck will take its rightful place in the collection of fans of Scania cars, including the handsome Scania S730 tractor unit. When choosing a configuration for the virtual trucker of the ETS 2 simulator, chassis variations with wheel formulas from two to five axles in the amount of fifty-four types are available. The collection of cabins is also varied, there are five of them, for every taste and budget. A variety of engines with power from 230 to 730 horsepower will amaze any player, because their abundance totals more than forty pieces. Well, they’re finishing the selection of gearbox power units, with a variation from eight to fourteen speed positions. Global changes were made and the interior of the cabin in several versions. Well, the number of elements for external tuning just can not be counted, there are really a huge number of them. The player will have to achieve any modification of his steel horse, making it as individual as possible.

The Scania Streamline tow truck is implemented using a truck included in the standard vehicle fleet of the simulator. A special platform was installed on the heavy chassis, which allows transporting...