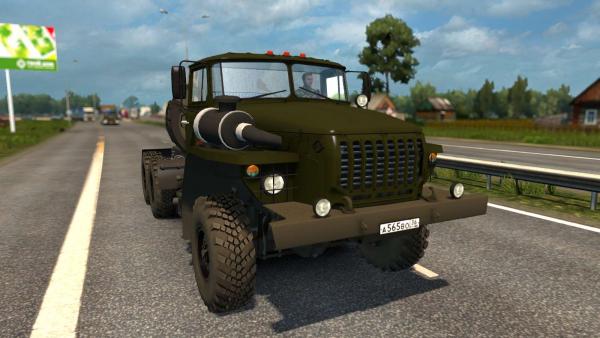 The Soviet automobile industry is famous for its powerful off-road trucks. One of such representatives can be recognized as the Ural-4320, produced since 1977, and to this day, at the Ural Automobile Plant. A truck built on a chassis with a 6x6 wheel formula was designed for off-road use, which can be easily seen on the additional location to the ETS 2 simulator, map: Severe Russia Baikal, where the lack of road surface is more than normal than a drawback.

The mod of the Ural-4320-10 truck for Euro Truck Simulator 2 impresses with the number and variety of modifications; from the power units, the authors prescribed a dozen original engines with their own characteristic set of sounds, five types of chassis and twelve gearboxes. Realistic control features complement the technical component of the car. When buying, in a car dealership, a virtual trucker will be asked to choose a modification option, in addition to a conventional tractor, there are two cranes, tanks, bodies, booths and other attributes. Of the items that change the appearance, the kit includes a bumper, a trunk, a winch and several high-quality skins. Off-road properties will help strengthen special wheels with high-pass tires. And of course, the developers did not forget about the original salon with full animation.

In addition, there is the possibility of installing special trailers for a truck, which can be downloaded from the links below:

Dear user of the site, traveling on the roads on the domestic truck, to feel like a real Russian trucker, we recommend you to download and install the mod Russian radio stations for any version of ETS 2 simulator!
Ural truck tractor trailers
Previous modNext mod